Ubiquitous sandwich maker Subway will be a little less omnipresent in 2018, after the closing of 909 U.S. locations in 2017.

The closings are reportedly “just the tip of the iceberg for Subway closures,” according to Business Insider, and they come amid a swirl of circumstances that have led some franchisees into outright revolt.

Last week, more than 400 franchisees reportedly signed a petition protesting the return of the $4.99 Footlong promotion this January. Franchisees are already facing plummeting profit margins and claim that the promotion will make further dents in their pocketbooks.

“The national promotional focus over the past five years … has decimated [us] and left many franchisees unprofitable and even insolvent,” petitioners penned in a letter to Subway.

Subway’s head of North American marketing, Karlin Linhardt, resigned in the wake of the news.

According to The New York Post, Subway’s customer traffic has decreased by 25 percent over the last five years, and up to a third of franchise stores have become unprofitable.

This recent spiral comes on the heels of several other public relations disasters for the chain. Last year, a judge dismissed a case that claimed Subway’s “Footlong” sandwiches were only 11 inches long, with the chain embarrassingly saying that “Footlong” was only a brand name and not a size promise. In 2014, it was revealed that Subway’s bread contained a chemical used in the production of yoga mats. And in 2015, pitchman Jared Fogle…. well… you know what Jared Fogle did. Then earlier this year, a Canadian television station broadcast allegations that Subway’s chicken was mostly soy filler.

So, enjoy your $4.99 “Footlong” in the coming month because it’s likely to be that last you’ll ever have. If your franchise location is still around, there’s little to no chance that Subway will dare run the promotion again.

And it you’re a Subway fan, rest easy. The closures are a dent, but Subway still boasts 44,014 stores worldwide. 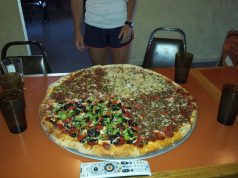