Humble and Competent, Rudy’s is fantastic food set in paradise

With stucco-looking walls, dim lighting and a slightly cramped dining room, Rudy’s has more of a laid-back, unpretentious Mediterranean feel than the chichi French restaurants on the islands. The food matches. The place and its food exude humble, effortless, understated brilliance.

We came here during our honeymoon in October, 2017, looking to have a spiffy and nice dinner, but not an evening gown-and-tuxedo affair.

Rudy’s picked us up for the dinner in a no-frills minivan, along with another couple. They will pick you up from anywhere on the island. We later observed our van driver performing other roles at the restaurant, including bussing our table.

There is a can’t miss sense of experienced competence at Rudy’s. When we first called for a ride that evening, we tried to relate to the man who answered where we were on the island (since they have no addresses), and my descriptions failed. The man had a wizened air and said, in very good English, that we’d have to call back when we had a better description. It was clear he didn’t have time to figure it out from my long-winded explanation. But here’s the thing: we kind of appreciated that. It helped us to get in line with the island’s geography, and it let me know that we were dealing with a competent person at an important place, who above all, was busy.

When we arrived, we found out why he was busy. The man was our waiter. He looked to be in his early 60s, and he seemed as if he had worked there for decades. He knew something about each dish. When Jim asked what he should have, he immediately responded that the Crab-Stuffed Parrotfish was their specialty, the dish that put them on the map. When Tiffany, who loves steak and loves cheese, ordered the filet in the sherry sauce, but with melted Roquefort on it as well, he took on a look of immediate consternation and explained immediately how that would throw off the entire dish.

Let’s stop there because we really appreciated that. In the United States, at a casual dining restaurant, the response you’d get to such a request is, “Sure! Anything else?” At a higher-end restaurant, it would be, “Are you sure you want both on there?” His response was (I’m paraphrasing, but not by much), “You don’t want that. It would ruin the dish.” So we got the wine reduction sauce on the side, and he was right. It was better not having been mixed in.

Now, let’s return to the narrative before getting back to the filet. We started a 2015 French Gewurtztaminer by J. Riehl. We’d never had that type of wine, but it was very comparable to a Riesling, and we enjoyed it. It was served in a tableside bucket stand, where it stayed on ice.

Our appetizer was the warm goat cheese salad, with slices of delectable goat cheese on crisp croutons, with greens tossed in a mustardy-vinegar dressing. It was wonderful, and we both agree that it was among the top things we ate during the entire vacation.

Our main courses were equally good. He did not steer us wrong with the Crab-Stuffed Parrotfish (though I’d been just a smidge apprehensive because earlier that day we’d been snorkeling within five feet of a parrotfish). It was very flavorful. Tiffany’s filet (with Sherry sauce on the side) was tender and done perfectly. She is a bit of a filet connoisseur, and I believe she ranked it as the second-best filet we had in French Polynesia. Both dishes were served with a slab of thinly-sliced potatoes.

We had been shuttled to the restaurant with another American couple, who were in the restaurant business as well. It was clear that they are regulars, or as close as a couple living 6,000 miles away could be to regulars. From the time they entered the restaurant, they had been asking for Rudy. They wanted to speak with him and take a picture. The grizzled waiter kept putting them off, but at about the third request, at the end of the meal, he finally brought out a reluctant Rudy.

Apart from telling him about how much they enjoyed his steak, the couple wanted to tell Rudy about the benefits of getting on Yelp, to which Rudy gave nothing but a polite nod. He then reluctantly posed for a photo and headed back to the kitchen to get to work.

We enjoyed that episode for many reasons, but mostly because of this: the restaurant, it turns out, is a perfect reflection of its proprietor. It’s modest, not picturesque, doesn’t deal in pomp, pageantry and grandeur. It’s just DAMN GOOD. Rudy, his staff and his restaurant are about quality and competence, and that’s what you get. 5/5. 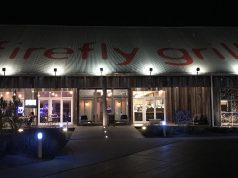